K9 "Thor" of the Andover Police Department, passed away on Saturday, August 17, 2019 after 8 years of service.

The Andover Police Department is very sad to report that on Saturday (08/17/2019), following a brief illness, our oldest and finest K-9 “Thor” passed away. “Thor” would have been 10-years old in September, and was scheduled to retire in just a few weeks.

“Thor” was a male Belgian Malinois, born on September 16, 2009 in The Netherlands, and purchased on April 25, 2011 through the Hill Country Dog Center in Pipe Creek, Texas, made possible through a donation by the Capital Federal Bank in Andover. “Thor” was actually a “Blue” Belgian, which refers to the color of his coat which is considered rare in this breed. “Thor” began his official training through the Sedgwick County Sheriff’s Office in April of 2011 and successfully completed the 10-week Patrol Dog and Drug Search School with then Officer Mickey Farris in July of 2011. “Thor” was a dual purpose K-9 trained and certified through the Kansas Police Dog Association (KPDA) in both drug detection including Marijuana, Heroin, Methamphetamine and Cocaine, as well as, Patrol Tactics which included building and evidence searching, and had many successful searches during his 8+ year career. “Thor” was also certified in Tracking and Trailing, and loved to go to the schools and community events to perform demonstrations.

“Thor was a phenomenal dog, and I truly believe that he was one of the finest Police K-9’s in the State, both for Drug work and Police work. He will be very missed!”
Chief Mike Keller

With the passing of “Thor” Officers of the Andover Police Department will be wearing the black band of morning through 12:00 midnight on Saturday, August 24th, 2019. Additionally, a memorial tribute for “Thor” is currently being planned for 1:00 p.m., Saturday, September 28th at the Amphitheater in Central Park, just prior to the Greater Andover Days (GAD) K-9 Demonstration, a demonstration that “Thor” has been a part of for many years. 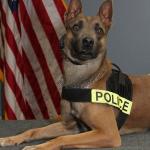